The Pope, Calvinism, and Inequality 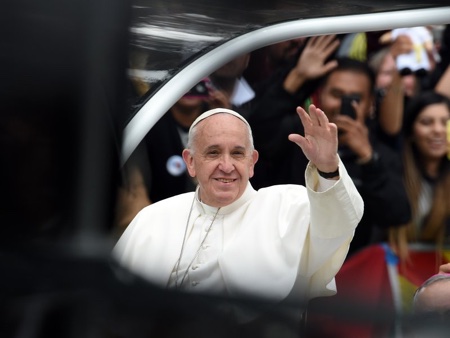 [Read this article directly on TheJakartaPost.com]

Pope Francis gave a historic speech to the US Congress last week. He urged the US government and Catholic leaders in the country to focus on peace, poverty and environmental stewardship. He also mentioned four distinctive non-Catholic and Catholic Americans who made a huge difference to society, from whom we all should learn: Abraham Lincoln, Martin Luther King Jr, Dorothy Day and Thomas Merton.

Overall, the Pope was disappointed with the US, as one of the wealthiest countries, which was built by Christians in a “Christian spirit”, but oversaw rampant inequality.

The Walton family, for example, has more wealth than 42 percent of American families combined” and “The median American estimated that the CEO-to-worker pay-ratio was 30-to–1, and that ideally, it’d be 7-to–1. The reality? 354-to–1. Fifty years ago it was 20-to–1.”

However, most Indonesians may think that such statistics do not concern them. The reality is, however, that everything that happens outside Indonesia, including inequality of wealth in the US, concerns Indonesia to an extent. The most obvious is probably the limited purchasing power of most Americans, who are among the largest importers of Indonesian-made products.

Ideally, Americans should enjoy greater economic equality, so they can enjoy a better quality and higher quantity of overseas products. On emotional health, the better off a nation’s middle class, the more positive vibes we can expect to experience worldwide, which also concerns Indonesia.

For non-Christian Indonesians, it may be confusing as to why the US, as a country established on the spirit of Christianity, does not reflect the values urged by the Pope?

First things first, Pope Francis is the first Jesuit Pope in the history of Catholicism. The Jesuit Order (Society of Jesus), which was founded by Saint Francis Xavier and Ignatius de Loyola, is known as one of the more progressive orders and “the knights” of Christ.

Jorge Mario Bergoglio was probably chosen to replace Pope Benedict XVI as the Vatican endured numerous problems, including alleged corruption and sexual assaults by priests. A desperate time needed a special kind of leader. Today, Jesuit priests are involved in education, including founding schools, universities, presses and public educational activities. They are also known for their political and social involvement in the protection of the voiceless, including the poor, the disenfranchised and the oppressed.

Many Jesuit priests hold doctorate degrees and experts in worldly and religious subjects, including chemistry (like Pope Francis) and Islamic studies. Their educational background highly influences how they think and makes them progressive.

This is reflected in Pope Francis’ statements on various issues, including homosexuality, atheism, divorce and inequality.

However, Pope Francis’ notion of Christianity as the protector of the disenfranchised isn’t new. He simply reminds every Christian (regardless of their denomination) that Jesus was born in a stable and grew up the son of a humble carpenter. His love for the homeless, the sick, the poor and the marginalized are evident in the bible verses that were written by his students.

Second, the US is a country many of whose founders followed the philosophy of John Calvin. Calvin gave a sermon to his congregation in Geneva in 1555, which later became known as “the Protestant Virtues.”

This new viewpoint was slightly different from that which the Catholic Church (as one of the oldest versions of Christianity) believed.

The virtues Calvin cited were hard work, self denial, patience, honesty and duty. They may have looked quite harmless to a layperson, but when these virtues were mixed with Adam Smith’s version of capitalism, the effects were explosive.

Calvin suggested that people should not live a lavish lifestyle, but instead reinvest their earnings back into their business as investment. This explains why Warren Buffett lives a modest lifestyle, works hard, and reinvests his profits tirelessly.

Calvin added that being good in business was more pleasing in the sight of God than being an aristocrat whose wealth came from the backbreaking activities of peasants. In other words, being good in business or being profitable means “receiving more blessings from God.” In 1904–1905, Max Weber in his book The Protestant Ethic and the Spirit of Capitalism explained this phenomenon.

The US, Indonesia and the world can return to what Jesus taught: Love your neighbor, and do unto others as you would wish others to do unto you.[]

Jennie M. Xue
The writer is an international author and columnist based in Northern California.