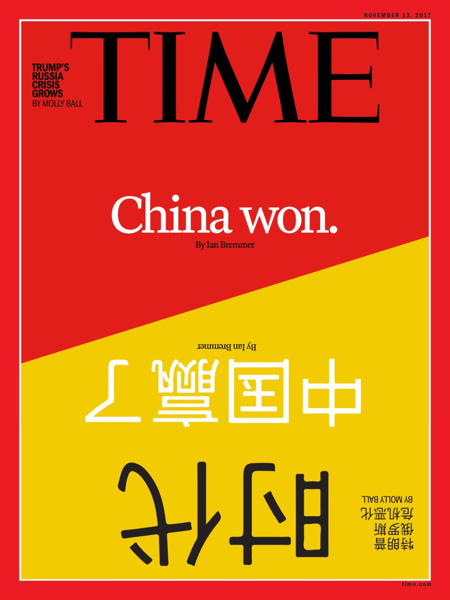 In this analysis by Ian Bremmer, the rise of China as the future superpower of the world is a superb news.

The Chinese authoritarian-capitalist model wasn’t supposed to survive in a global free market, let alone thrive. As recently as five years ago, there was consensus that China would one day need fundamental political reform for the state to maintain its legitimacy and that China could not sustain its state capitalist system. Today China’s political and economic system is better equipped and perhaps even more sustainable than the American model, which has dominated the international system since the end of World War II. While the U.S. economy remains the world’s largest, China’s ability to use state-owned companies to boost the party’s domestic and foreign influence ensures that the emerging giant is on track to surpass U.S. GDP in 2029, according to the Center for Economics and Business Research.

The U.S. is hardly irrelevant. The dollar remains the global reserve currency, an exorbitant privilege that will likely last for years to come. Wealthy Chinese continue to invest in U.S. real estate and send their kids to U.S. schools. But the pillars of U.S. power–its military alliances, its trade leadership and its willingness to promote Western political values–are eroding.

and the social usage of algorithms:

In the West, companies use algorithms to expand profitability, while citizens use them to become better-informed consumers. In China, companies use algorithms at the behest of the government to ensure that citizens remain within the rules of order set by the political leadership. There is no better example of this than the “social credit system” that China is developing, a system that allows state officials to assess a person’s financial data, social connections, consumption habits and respect for the law to establish the citizen’s “trustworthiness.”

Imagine a credit report that reveals whether you’ve ever committed a crime, been caught cheating on a test, been drunk in public, missed an alimony payment, been fired from a job, signed a petition, visited undesirable websites, been photographed at a protest or written something on the Internet that led administrators to question your loyalty to the state. A good social credit score could lead to a promotion, a raise, a better apartment, admission to a good school, access to state-approved dating websites, better stores, better doctors, the right to travel, a more generous pension and important opportunities for your children. A bad score could put you in jail.

The world has changed and will continue to change. Have you embraced your Chinese-ness?